Verticillium wilt, caused primarily by Verticillium dahliae Kleb., is one of the most important soilborne plant diseases around the world. In potato production, Verticillium wilt is present throughout most potato-growing areas and results in substantial yield losses. Verticillium wilt is also known to occur in conjunction with several other pests, pathogens, and diseases, including root lesion nematode, black dot (caused by Colletotrichum coccodes), Fusarium spp., and Erwinia spp., forming a disease complex known as potato early dying. The disease is characterized by the decline of plants many weeks earlier than normal maturity.

The disease is favoured by crop stress induced by heat, drought, nutrient deficiencies and insect damage. Pathogenic fungi build up in the soil with repeated potato production and can survive there for long periods. Fungus is transported by anything that moves soil such as farm machinery, footwear, animals, water and wind.

Initial wilt symptoms are followed by yellowing and eventual browning and death of the leaves and stems. Not all stems arising from a seed piece may be affected. Wilting of the leaflets on one side of a petiole often occurs and is an excellent diagnostic characteristic. When an infected stem is cut at the soil line, the xylem may appear brown. In severe cases of Verticillium wilt, stem end discoloration will be present in tubers. Though all of these symptoms can be reliable indicators of Verticillium wilt, none are definitive diagnostic tools because these symptoms are often associated with other potato diseases (e.g., Fusarium wilt or early blight) or abiotic stress. 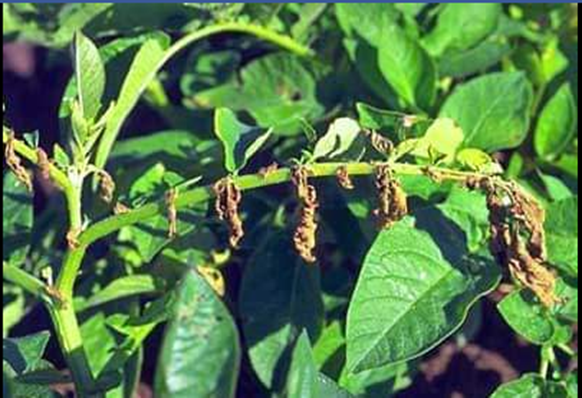