Alternaria brown spot, caused by the fungus Alternaria alternata is a very common disease of potato that is found in most potato-growing areas. It is often confused with early blight (caused by A. solani) and the two pathogens are closely related. Though losses rarely exceed 20 percent, if left uncontrolled, the disease can be very destructive.

The disease can occur at any growth stage. A. alternata has a wide host range and can be found wherever potatoes are grown. The spores and mycelia survive between growing seasons in infected plant debris and soil, infected tubers, and in overwintering debris of susceptible crops and weeds.

Leaf symptoms are small, dark brown lesions of dead cells. the lesions appear as they were spread by a pepper shaker on the leaves. Brown spots can occur throughout the season and usually is first seen before early blight. Its lesion looks similar to new lesions of early blight, however, although brown spot lesions have rings, they are fewer and are irregular than those of early blight and the lesions do not grow as large as early blight. Elongated, superficial brown or black lesions may also form on stems and petioles. Severely infected leaves eventually wither and die but usually remain attached to the plant.

Warm temperatures, extended leaf wetness and high humidity exacerbate the disease. The disease is most severe under overhead irrigation. Spores may infect tubers late in the season. Tuber infection is classified as black pit. Black pit is characterized by small, black pits forming on the tuber surface. 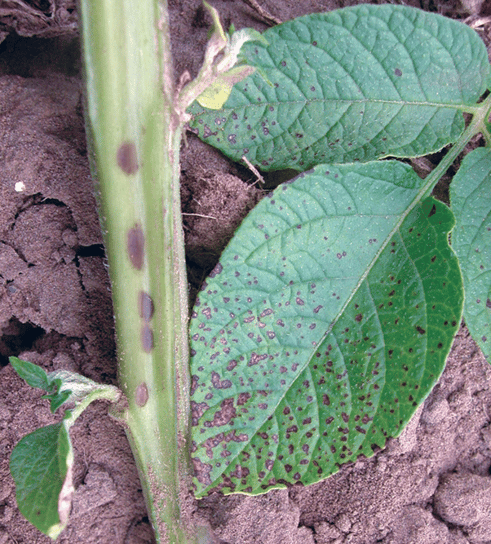 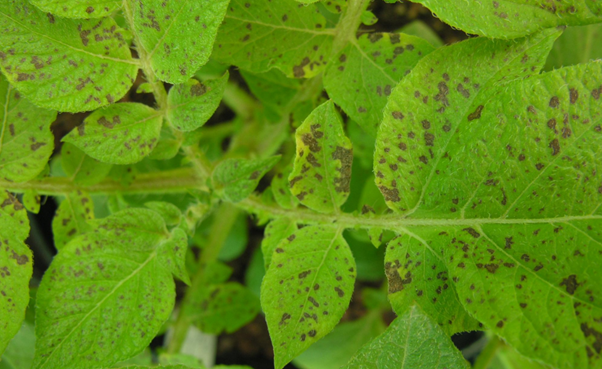