The blackleg disease of potato is caused by several species of bacteria that are tuber-borne, meaning they are carried and transmitted through the tubers. The blackleg disease can cause severe economic losses to the potato crop. However, the occurrence of blackleg depends very much on the growing conditions, particularly temperature and rainfall after planting.

The bacteria produce pectolytic enzymes that cause a wet, mushy rot of the tissues they infect. Pectolytic enzymes dissolve the middle lamella, composed of pectin, which holds plant cells together.

Blackleg is most commonly caused by Pectobacterium spp. Another genus of soft rot bacteria, Dickeya spp. can also cause blackleg. As infected tubers are the source of this disease and the pathogen is easily spread during seed cutting, blackleg is of great concern to certified seed growers.

Blackleg symptoms include soft rot of seed pieces, black to brown discolouration of the stem extending from the seed piece to above-ground portions of the stem, and stunting and wilting of affected stems. The blackleg disease sometimes develops early in the growing season soon after the plants emerge. This is referred to as early blackleg and is characterized by stunted, yellowish foliage that has a stiff, upright habit. The lower part of the below ground stem of such plants is dark brown to black in colour and extensively decayed. The pith region of the stem is particularly susceptible to decay and in blackleg infected plants, the decay may extend upward in the stem far beyond the tissue with externally visible symptoms. The typical blackening and decay of the lower stem portion is the origin of the "blackleg" designation for this disease. Young plants affected by blackleg fail to develop further and typically die. 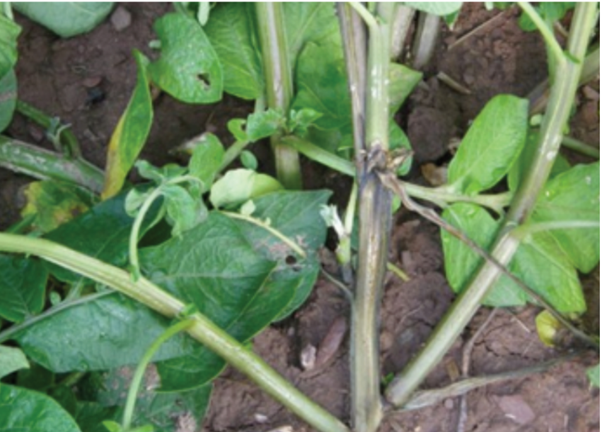